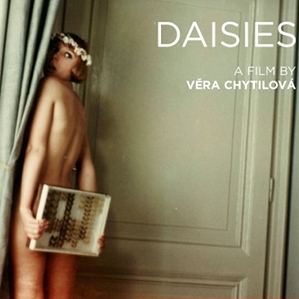 Daisies (Sedmikrásky in Czech) is a 1966 Czechoslovak dramedy directed by Věra Chytilová. It's generally regarded as one of the highest points for the Nová Vlna movement (the Czech New Wave). It follows two teenage girls (Jitka Cerhová and Ivana Karbanová), both named Marie, who refuse to play by the rules of the world they live in — since the world is bad, they decide they'll be bad too, and spend the rest of the film engaging in weird pranks and generally antisocial behaviour.

The film is famous for its unconventional filming, its surreal, psychedelic sequences and to be a bit of a Mind Screw.

It was filmed during a brief period of artistic liberalism before the Soviet invasion of 1968 which saw it banned for "depicting the wanton".

The movie is available in the Criterion Collection DVD boxset Pearls of the Czech New Wave.