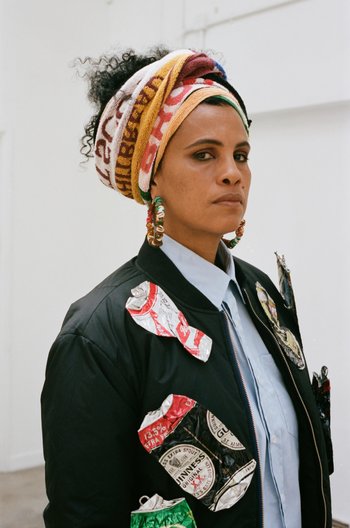 No moneyman can win her love
You got to be fortunate, you got to be lucky now
I was just sitting here; thinking good and bad
But I’m the kind of woman that was built to last
- "Woman"
Advertisement:

Neneh Cherry is a Swedish singer-songwriter, DJ, and rapper.

Born Neneh Mariann Karlsson on March 10, 1964, in Stockholm, Sweden, Neneh Cherry is the daughter of Sierra Leonean musician Ahmadu Jah and Swedish artist Moki Cherry. Raised by her mother and cornetist stepfather Don Cherry in Stockholm and New York City, Cherry left school at age 14, and in 1980 relocated to London to join a post-punk band called the Cherries. Following stints with other post-punk groups such as The Slits and the Nails, she would join the avant-punk outfit Rip Rig + Panic as the group's lead singer until their break up in 1984. She also recorded with New Age Steppers and as one-third of the one-off group Raw Sex, Pure Energy while still apart Rip Rig + Panic and sung in Float Up CP (a group which had contained much of Rip Rig's members), for their lone record, Kill Me in the Morning. She had also deejayed, playing early rap records on the black pirate radio station Dread Broadcasting Corporation.

Although, Cherry would begin a solo career in 1982 with the Falklands War protest song, "Stop the War", she would formally debut with her first studio album, Raw Like Sushi, a dance-pop record which dutifully combined many hip hop and dance music trends, as well as having a global hit in its lead single, "Buffalo Stance", a re-work of "Looking Good Diving" by Morgan-McVey. After the success of the record, she contributed to the benefit album Red Hot + Blue, with an cover of Cole Porter's "I've Got You Under My Skin" and to Massive Attack's Blue Lines (as a co-writer, arranger, and background vocalist for the track "Hymn of the Big Wheel"). Cherry would return to solo work with her second album, Homebrew, in 1992, which would see her collaborating with varied artists such as Gang Starr and Michael Stipe.

She would take four-year hiatus to raise her children, but would have another global hit in the form of a duet with Senegalese singer-songwriter Youssou D'Nour titled, "7 Seconds", which would be featured on her third record Man which would be released two years later. She would pop up intermittently with feature work throughout the 2000s ("Kids with Guns" with Gorillaz, "The Story of OVO" for the titular soundtrack with Peter Gabriel), work with alternative dance band, cirKus. She would also sing with Scandinavian jazz trio, The Thing for their avant-garde jazz assembly on The Cherry Thing and work with London electronic duo Rocketnumbernine, contributing songwriting to their debut album, MeYouWeYou. She would follow these efforts up by formally returning to her solo work with Blank Project in 2014 and Broken Politics in 2018, both being produced by English record producer and DJ, Four Tet and seeing her veer into an art rock territory, preceding the 30th anniversary expanded issue of Raw Like Sushi, her debut album.

She is the half sister of Eagle-Eye Cherry.