Literature / The History Of Arturius Aurelianus 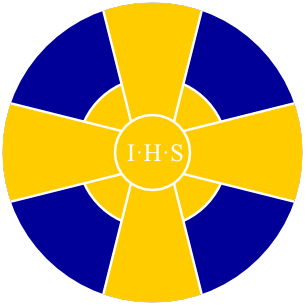 The shield of Arturius, bearing the inscription "IHS" (In hoc signo vincesnote Translation: "In this sign you shall conquer")
"Listen thee well, son of Artorius Draconarius. Since you have insisted thrice I will not withhold my knowledge. But let this be known at the final prophecy of Emrys Moridunius. You will die, not tonight nor tomorrow, nor in many days hence, but slain by your own blood and forgotten forever by history, but never by legend."
— Merlin, prophesying Arthur's fate.

The History of Arturius Aurelianus

, a real-life Welsh/Breton saint who in-universe claims a connection via shared cognomen with the Romano-British war leader Ambrosius Aurelianus

through Arthur, who in line with Historia Regum Britanniae is Ambrosius's nephew. Paul writes his account as a direct response to the only contemporary account of the times, a screed by St. Gildas

which omits Arthur, explaining later in the text that Gildas's deliberate omission is nothing less than an Unpersoning of Arthur for their past contention.

Paul's work, Historia Arturii Aureliani, goes into the history of Britain and the coming of the Saxons, and those who rose up and fought them. Many of the familiar characters such as Arthur, Kay, Bedivere, Gawain, Guinevere, Merlin, Mordred turn up, but not quite in the way one might think at times...

The History of Arturius Aurelianus provides examples of the following tropes: