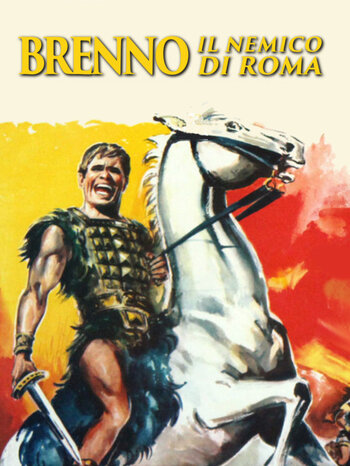 Brenno il nemico di Roma, known in English as Brennus, Enemy of Rome, is a 1963 Italian Historical Fiction film directed by Giacomo Gentilomo, narrating (with several artistic licenses) the events that took place in the year 391 B.C., as the Roman Empire is attacked by the Celtic hordes coming from the north and led by the ferocious barbarian king Brennus (Gordon Mitchell).

Cutting a bloody swathe through the Italian peninsula, and overpowering every attempt at resistance the Romans try to come up with, the Celts are already only a few days away from the Eternal City. The Romans' most capable commander, Marcus Furius Camillus (Massimo Serato), is falsely accused of corruption by political rivals, and goes into voluntary exile in Ardea, choosing to live as a farmer. As the Roman Senate decides to send an embassy to Brennus, the invaders attack Clusium, a town close to Rome, and capture many citizens, among which Nissia (Ursula Davis), a priestess of Minerva and bethroted to the Roman commander Quintus Fabius (Tony Kendall). In an attempt to spare her citizen from the slaughter, Nissia accepts to marry Brennus, much to Quintus' dismay...

Advertisement:
Camillus: "Brennus! Not with gold, but with iron, Rome will be recovered!"