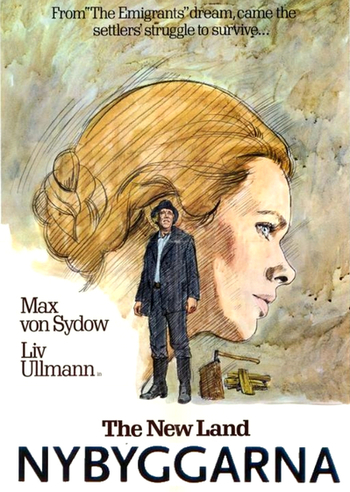 The New Land is a 1972 film from Sweden, directed and co-written by Jan Troell, starring Max von Sydow and Liv Ullmann, telling the story of the people who would be saying "Yah, you betcha" 140 years later in Fargo.

It is an adaptation of the Swedish novel series The Emigrants and sequel to 1971 film The Emigrants, which also starred Von Sydow and Ullmann. Von Sydow and Ullmann reprise their roles of Karl-Oskar and Kristina Nilsson. The film opens with the couple arriving with their family in Minnesota in 1850, taking up residents as tenant farmers in the countryside and joining a small community of fellow Swedish immigrants. Life is difficult for the new arrivals, with the normal burdens of the pioneer farmer combined with the increased expense of living in America, the brutality of the winters on the Great Plains, and the danger presented by the Sioux Indians, which culminates with the 1862 Dakota War

. Through it all, Karl Oskar remains pleased with the decision to emigrate and the opportunities the New World presents, but Kristina is forever homesick, longing for a country that's far away and can never be reached again.