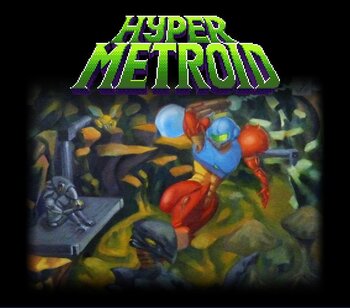 Hyper Metroid is a Super Metroid fan hack by RealRed. In an Alternate Universe, Samus Aran settles down with her husband, Adam Malkovich, on a peaceful space colony. However, disaster strikes when Space Pirates destroy the colony, massacring everything in their path. Samus is the sole survivor of the disaster and tragically loses her child soon after. Samus goes on a Roaring Rampage of Revenge as a result, wiping out the Metroids on SR-88 after she learns the Space Pirates seek to weaponize them and leaving one infant Metroid alive to lure them out into the open. After Ridley takes the bait, Samus follows him to Planet Zebes, seeking to put an end to the Space Pirates once and for all.

This hack focuses on exploration. The goal is to unlock 15 gates to allow the player to access Tourian and kill Mother Brain. There are many paths the player can take through Zebes to achieve this goal. The map and ammo system have been overhauled and some quality of life changes made to the original Super Metroid engine.

The hack can be downloaded here.