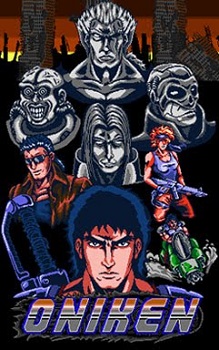 Clockwise from the top right: General Doozor, Geist, Co-Dragons Dr. Grimm and Hackan
L-R on the bottom: Rico Maox, Zaku, Jenny Connor
"The machines can't stop him. No one can stop the unstoppable."
Advertisement:

Oniken is a 2012 retro 2D action platformer by Joymasher, made for PC in Multimedia Fusion 2. Set in a post-apocalyptic environment, it tells the story of Zaku and his quest against the eponymous Oniken organization, which rules the world with an iron fist.

In 2016 it got an Updated Re-release on GOG.com that has better compatibility with controllers, more graphical polish on certain characters and some gameplay changes.