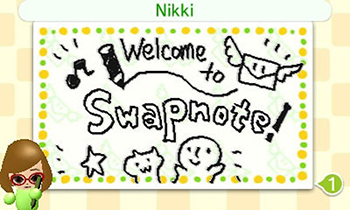 Swapnote, or Itsuno ma ni Koukan Nikki in Japan (Nintendo Letterbox in the EU, Nintendo Mailbox in some other areas) was a free messaging app on the Nintendo 3DS released in late December of 2011. Unlike other messaging apps that let you give small blurbs of text, you essentially send scribbled notepad messages which are "redrawn" to the recipients, and even have the ability to draw in 3D along with attaching 3D pictures or sound bites. These messages can be sent to friends online via SpotPass or person-to-person StreetPass.

Aside from the ability to scribble notes, it is possible to make Yonkoma, RPGs, and if skillful enough, small animations. It is even possible to set up Alternate Reality Games given the ability to pass messages from person-to-person. You can also unlock various Stationery and features to use that can be purchased with the Nintendo 3DS's in-system currency Play Coins.

Perhaps most interesting of all is the popularity it has garnered not just from its messaging functions but from Swapnote's guide in the form of a Mii called Nikki (in the bottom left side of the pic to the right). Already various fanart of her have popped-up since the app debuted. At New Year's Day at 2012, Nintendo themselves sent out a new stationery (that can be acquired by simply having a friend send a message with the new stationary to you), along with a QR Code of Nikki's own official Mii usable in Mii Maker.

To protect minors, Nintendo discontinued the application's SpotPass features on November 1, 2013, due to users sending each other offensive material.

Despite the end of Swapnote, Nikki is still around: she's become the mascot for the news page of Nintendo's Japanese website, and starred in Nikki's Travel Quiz, a trivia game about Japan that was exclusive to the Japanese Club Nintendo. She's also made appearances in other Nintendo software, having hosted a SpotPass art lesson in Art Academy, been a Mystery Mushroom costume in Super Mario Maker, and received a set of badges to decorate 3DS home screens with in the Nintendo Badge Arcade. Plus one of the backer-designed enemies in Shantae: Half-Genie Hero is a Nikki homage called Ikki. She also appears as an assist trophy in Super Smash Bros. Ultimate.

A new version of the program, Swapdoodle, was released in 2016, that includes Downloadable Content and drawing lessons.