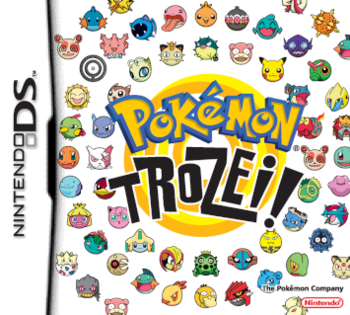 for the original game.
Advertisement:

Pokémon Trozei!, known as Pokémon Link! in Europe, is a puzzle game series developed by Genius Sonority and published by Nintendo. Players use the touch screen to move Pokémon around the playing field, with the aim of making matches. The number of Pokémon required for a match depends on the game and difficulty level, but a successful match triggers a Trozei Chance, a short period of time where fewer Pokémon are required for a match.

The first game in the series, Pokémon Trozei! was released in Japan for the Nintendo DS in 2005, and internationally the following year. It follows SOL agent Lucy Fleetfoot, who has been tasked with rescuing kidnapped Pokémon from the Phobos Battalion. She accomplishes this by using a device called the Trozei Beamer, which teleports groups of Pokémon back to SOL headquarters.

To many people's surprise, a Nintendo 3DS sequel named Pokémon Battle Trozei! was released in March of 2014. In this game, the player battles and captures wild Pokémon. The wild target's hit points are lowered by creating matches, but it may attack the playing field in turn, which lowers the player's health. Once a Pokémon's hit points are reduced to zero, it may be captured.

Another game in the series on 3DS, Pokémon Shuffle, was released in February 2015, with gameplay based primarily on Battle Trozei! but based more on using a limited number of moves and building combos than on clearing the board. The game is also free-to-play, with a hearts system and microtransactions similar to many mobile phone games. Actual mobile versions for Android and iOS were released on late August 2015.

The Pokémon Trozei! games contain examples of the following tropes: