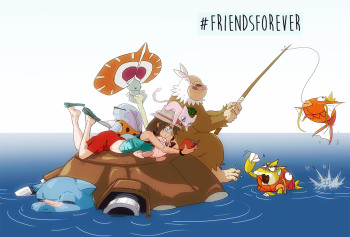 Twitch Plays Pokémon (TPP) is a series of social experiments that started in February 2014 in which commands representing buttons on an original Game Boy Advance (up, down, left, right, A, B, L, R, and start) are entered into a chat on Twitch, and then translated into a game of Pokémon via an IRC bot. In short, thousands of people are fighting over a controller. Throughout its life, Twitch Plays Pokémon has spawned hilarious characters, memorable moments, and even a few religions.

Following Twitch Plays Pokémon Emerald, the game, a remake of Pokémon Red and Blue, began on April 11, 2014, with the protagonist once again being a girl named A. Before the game started, the streamer ran the game's data through a randomizer, resulting in a Machop being the chosen starter Pokémon. ...A Machop that has the Truant ability. With Pokemon in the wild such as punching birds and Surskit with Hyper Beam, this is sure to be a run to remember.

At 15 days, 2 hours, 2 minutes, and a mere eight attempts (In comparison to last time, which took over one hundred times), the Elite Four and Champion Green were defeated, making A the Champion of Kanto.

Come April 2016, in the lead up PBR 2.0's debut, several older run saves were played. FireRed was the first, almost 2 years after its end. It's brief presence was soon followed by Emerald.