Literature / Up the Down Staircase 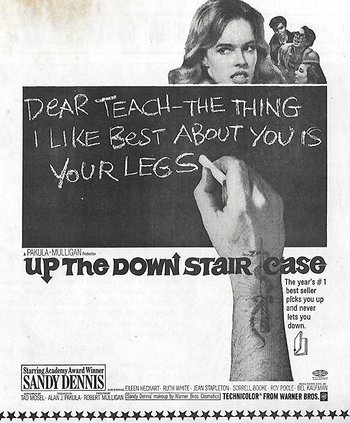 Up the Down Staircase is a 1964 Epistolary Novel by Bel Kaufman. A bestseller, it was adapted into a 1967 film and later on a stage play.

The book tells the story of a young, idealistic teacher named Sylvia Barrett. Fresh out of college, Sylvia begins her first job as an English teacher at an inner-city public high school in New York City. Unfortunately, many of Sylvia's students are more interested in disturbing the class and goofing off than learning anything. Sylvia is not dissuaded and continues to try and teach her students about literature nevertheless.

The film was directed by Robert Mulligan and stars Sandy Dennis as Sylvia, along with Patrick Bedford, Eileen Heckart, Ruth White, Sorrell Booke, and Jean Stapleton.

Up the Down Staircase provides examples of:

Alternative Title(s): Up The Down Staircase