Film / Eye of the Needle 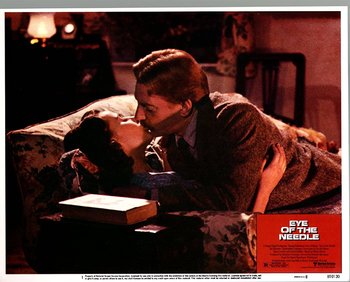 Lobby card
Eye of the Needle is a 1981 World War II spy-thriller film directed by Richard Marquand and based on the book of the same name by Ken Follett. It stars Donald Sutherland, Kate Nelligan, Christopher Cazenove, and Ian Bannen. Bill Nighy and Rik Mayall make their film acting debuts in bit parts.
Advertisement:

It's 1944, and the Allied Armies in England are on the verge of launching an invasion force to liberate mainland Europe from the Nazis. Henry Faber, a ruthless German spy nicknamed "Die Nadel" (The Needle) for his signature weapon, has learned that the coming invasion will not be at Pas-de-Calais like the Germans have been lead to believe, but at Normandy. With information that could turn the tide of the war, Faber makes his way across Britain with Allied agents hot on his tail, and finds himself stranded on a remote Scottish island populated by a reclusive ex-pilot, his wife, and their young son. As Faber tries to find away to alert his superiors, the wife begins to slowly fall for him, catching him a doomed love triangle as her husband begins to suspect he's not what he claims to be.

Eye of the Needle is notable as the film that convinced George Lucas to hire Marquand to direct Return of the Jedi, impressed how he handled such a difficult production on-schedule and on-budget. To-date, it's the only theatrically-released adaptation of Follett's works.

Alternative Title(s): Eye Of The Needle