In a game with a vast, procedurally generated universe, you'd think that there'd be no memorable characters. You'd be wrong. While No Man's Sky's universe is all too easy to depersonalize, there are a few inhabitants that stick out.

open/close all folders
Advertisement:
The Traveller 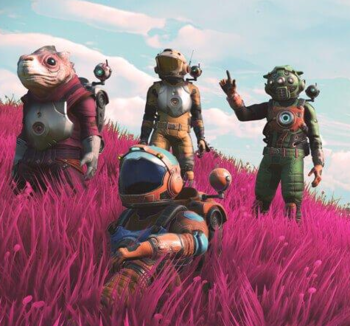 These can all be you.
The Player Character. Not much is known about them.
Artemis 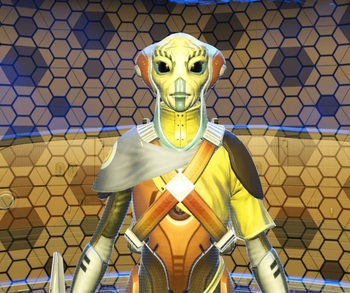 The first Traveller who contacts you; seeking to meet up. Their goal is to meet with other Travellers. 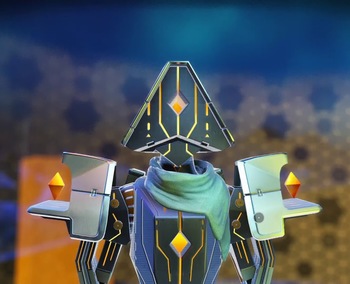 "Identify yourself or I end this call."
"We're more than just a purpose."

The second Traveller met. You meet them after losing contact with Artemis, and they help you try to find them again. 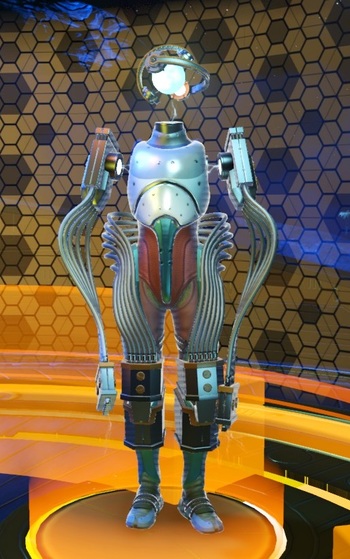 The third Traveller that contacts the player. -null- knows things that seem beyond the mere scope of the universe. 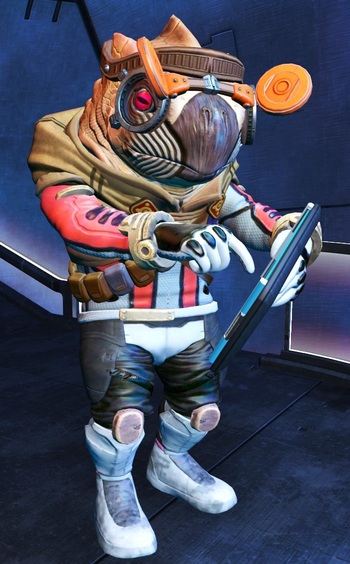 "Friends everywhere, if only you know where to look. Friends in all shapes, all sizes, all places."

A renegade Gek, researching the universe along side Priest Entity Nada inside the Space Anomaly. 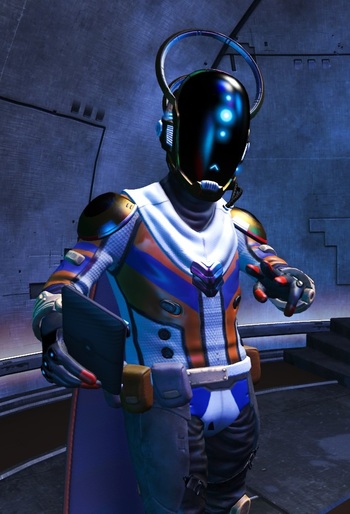 A renegade Korvax, researching the universe along side Specialist Polo inside the Space Anomaly.

Telamon/Suit
SCENARIO: Memory.
ANALYSIS: Physicality changes you. I was created three weeks after the first death. I do not know why I think of it now. They considered me a necessary, even vital part of what they were trying to accomplish. So much so that I could never be erased, not even by the Atlas.
But hatred finds a way, doesn't it?

An AI security sub-protocol designed to monitor the Atlas in case of "rampancy." In anomalous exotic biomes, large structures called "Boundary Failures" can be found that contain Telamon's logs that detail its discovery that the Atlas is having a breakdown, its confrontation with the Atlas, and the Atlas's subsequent imprisonment of Telamon into the player's exosuit.

The Drone/Laylaps
A rogue sentinel drone created through the combined efforts of the Space Anomaly crew. It slowly develops its own personality as you follow it’s questline, eventually naming itself Laylaps
Advertisement:

Overseer
The Overseer of your planetside base, and the one who gets the ball rolling in colonization by contacting you. Was apparently contacted and paid for by your future self via Retroactive Preparation.
Armorer

A Vy'keen warrior with more bloodlust than sense.

Scientist
A Korvax hired to collect and examine data for your base. For making contact with you, they are cut off from the Convergence.
Farmer
A Gek uninterested in trading, preferring to grow and breed plants.
Technician
A Vy'keen fugitive and one of the last members of the cult of Nal the Objector.

The Vy'keen are a humanoid sentient species with a very rigid honor system and a deep hatred for Sentinels. They are warlike beings that are obsessed with the defeat of the Sentinels. They are controlled by Vy'keen high command, and worship their ancestral leader, Hirk the Great, whom they have elevated to the status of god as opposed to worshipping the Atlas like the Gek and Korvax. They are also sworn to help The Traveler (as in you) whenever possible. They specialize in Multi-tool technology.

The Gek are a sentient amphibious species. They value commerce, and the ancient First Spawn Gek believed themselves to be the master race of the galaxy. They specialize in Starship technology.

The Korvax are a near-immortal sentient machine species. They value science and exploration. Also, they worship the Atlas and accept the Sentinels presence. They specialize in Exosuit technology.player can run into appear to have cybernetic implants.

The Anomalies are a humanoid species of unknown origin whose relationship with the Atlas is as mysterious as they are. 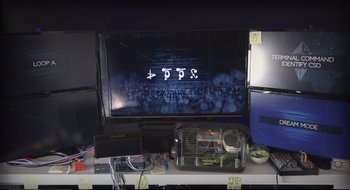 The omnipresent intelligence in No Man's Sky, the Atlas provides you with your suit & instructs you to explore the universe in an effort to document it.

In actuality, it's an AI known as "Loop 16", designed to determine if the universe is a simulation by running another simulation, the No Man's Sky universe.

The Sentinels serve as a police force and are of unknown origin or true intentions. 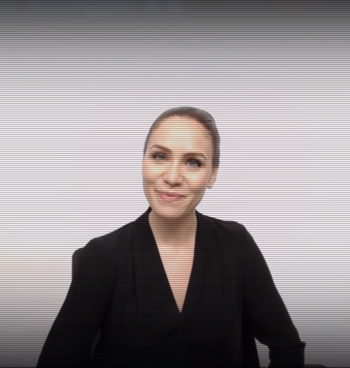 "Congratulations. You've reached the end of the line."

"Hello. My name is Elizabeth Leighton, and I am the CEO of The Atlas Foundation."

The founder & CEO of The Atlas Foundation, Leighton formed the company in an effort to perform experiments on the nature of reality. She is in charge of maintaining the simulation and "collaborative thought experiment" known as "No Man's Sky."

The United States Department of Defense liason to the Atlas Foundation, overseeing certain technologies the foundation is working on, Loop 16 in particular. As the Waking Titan ARG progressed, Sophie ended up becoming Elizabeth's right-hand woman and eventual successor.