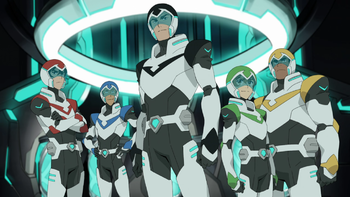 Alright boys, time to suit up.
Shiro: Defenders of the universe, huh? It's got a nice ring to it.

An Earth mission to the moon Kerberos goes awry when aliens intervene. One year later, a group of rookie space academy students and one dropout look into a mysterious meteor crash, and signals pointing to something called "Voltron".