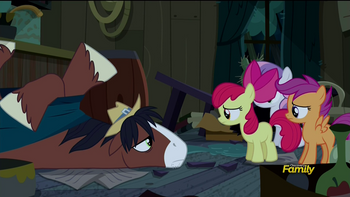 "Upside-down horseshoe — bad luck. Follows me wherever I go like sour on old milk."
Written by Dave Polsky
Advertisement:

Applejack and the Cutie Mark Crusaders are in Appleoosa for a rodeo competition, with Applejack competing in the hay bale-stacking contest in place of her cousin Braeburn, who has injured his foreleg. The Crusaders, meanwhile, are looking to enter an event as a way to get their cutie marks. As Apple Bloom is about to ask Applejack for permission to compete, a hay bale tower from a practice session falls over, nearly flattening the Crusaders beneath it. Upon investigation, Sheriff Silverstar finds a large hoofprint in the dirt and identifies it as that of Trouble Shoes, a notorious outlaw who's been sabotaging rodeos all over Equestria.

At a meeting of the townsfolk, the sheriff says that, despite the interference of Trouble Shoes, the rodeo will go on as planned. However, Applejack insists that the Crusaders return to Ponyville for their safety, and she even considers going back herself. Braeburn talks Applejack into staying and promises to keep an eye on the Crusaders. That night, after Braeburn falls asleep in his chair, the Crusaders sneak out of Braeburn's house to go find Trouble Shoes, under the assumption that they can earn their cutie marks by bringing him to justice. When Braeburn wakes up, he finds the Crusaders gone, and he sheepishly tells Applejack at her practice session. The two report the Crusaders being missing to Sheriff Silverstar, who heads off to find them.

The Crusaders wind up lost in the forest, and a sudden downpour of rain prompts them to seek shelter in a nearby cabin. Soon, the owner of the cabin enters: none other than Trouble Shoes, whose surprise at the Crusaders in his home causes a mess. Trouble Shoes turns out to be anything but a vicious outlaw. As Trouble Shoes leads the Crusaders back to town, he explains that he always had a passion for the rodeo, but his clumsiness caused no end of accidents, despite his practicing. On the day he was trying out for rodeo school, he got his cutie mark, an upside-down horseshoe, causing him to mess up his routine. The judges burst into laughter, and he ran off without even finishing his routine. To this day, he could never keep away from rodeos and loves to watch them , but at every rodeo he would cause an accident due to his klutziness, leading to his bad reputation. Trouble Shoes bemoans his bad luck, but the Crusaders talk amongst themselves about how he's looking at his cutie mark all wrong, realizing that his true calling is being a rodeo clown. Just then, the sheriff and company find Trouble Shoes, and he's arrested for ruining the rodeos and filly-napping the Crusaders, despite their pleas.

The next day, the Crusaders trick the sheriff into leaving the jail to watch the rodeo and break Trouble Shoes out, bringing him to the rodeo disguised as a rodeo clown. Applejack and her team win the hay bale-stacking contest, and the rodeo clowns come out to entertain the crowd in-between the events. The Crusaders tell Trouble Shoes to join the clowns, but Trouble Shoes is hesitant. They insist that he's been looking at his cutie mark the wrong way, and that his talent is for making people laugh. Trouble Shoes joins the clowns in the rodeo ring, prompting all kinds of klutziness that makes the crowd laugh with delight. Trouble Shoes is initially delighted, but removing a water barrel that fell on his head causes his clown makeup to wash off. Exposed, Trouble Shoes apologizes for all the trouble he's caused, saying he never meant any harm, and that entertaining the crowd was the most fun he's ever had. Sheriff Silverstar says that he can understand the trouble at the rodeos but still has to put Trouble Shoes back in jail for filly-napping the Crusaders, prompting the Crusaders to confess that they ran off on their own. As punishment, the Crusaders end up having to clean up after the rodeo is over, with Applejack watching them. She says that though the Crusaders may not be going home with cutie marks, they at least helped Trouble Shoes understand his own better.