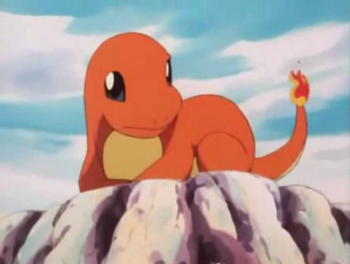 How long has he been up there?

Our friends, lost, discover an injured Charmander. Pikachu talks to it and learns that it's been waiting a long time for its trainer to return.

Later, at a Pokémon Center, we overhear a trainer named Damian bragging about abandoning his Charmander. Brock and Ash confront Damian, who challenges them to a battle. Nurse Joy breaks things up and reminds everyone that Pokémon are not to be used for settling personal disputes.

Ash, Misty, and Brock rush to retrieve the Charmander. It's not only threatened by a driving rain that could extinguish its flame, it's also under attack by a flock of Spearow! Fortunately, Pikachu is able to make the Spearow scatter so the Charmander could be saved.

They return to the Pokémon Center, where Nurse Joy says the Charmander requires an overnight stay.