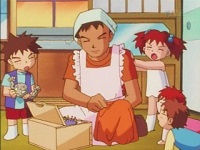 Brock is the ultimate anime waifu.
"Yes. Your Pikachu is in its cutest stage. It can't win"
— Brock

Finally Ash makes it to Pewter City to challenge the Pewter Gym for his first badge, the Boulder Badge. As he makes his way to a Pokémon Center to get his tired Pokémon healed, he runs across a man named Flint who scorns the idea that Ash has any chance of beating Brock. Misty explains that Gym Leaders are far stronger than normal Pokémon Trainers.

After healing his Pokémon Ash faces Brock, but is soundly defeated. Ash is distraught by how easily he lost, but later runs into Flint again who explains that Brock is an exceptional trainer, and indeed could be an even better one if not for his particular life circumstances. He shows Ash that Brock has been taking care of his many, many younger siblings since his dad left to become a Pokémon Trainer and his mom died after that.

Ash feels for Brock, but is still determined to win. Flint takes Ash to a hydroelectric dam explaining that Ash can use it to enhance Pikachu's electrical attacks. Ash then moves on to the gym with confidence.

In he rematch Pikachu is able to defeat Brock's Geodude with ease, but struggles again with Onix. When a small fire started by one of Pikachu's earlier attacks sets off the sprinklers, however, Ash has the chance he needs to win, as Onix is very weak against water. Instead of attacking, however, Ash calls of the match, stating that taking advantage of the accident would not be a real victory. Brock then rewards Ash with a Boulder Badge for his kindness in not attacking Onix while he was hurt. Brock explains that he really wants to breed Pokémon instead of fighting them, but he is stuck with the gym since he has to care for his siblings.

Flint then shows up to reveal he is actually Brock's father and that Brock can journey with Ash to become an experienced breeder while he stays at home to care for his kids. Thus the episode ends happily.