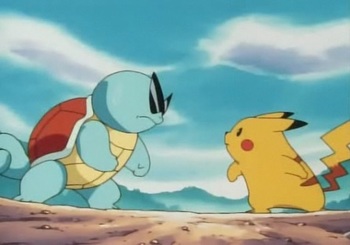 Pikachu vs. Squirtle stand off.
The Squirtle says that if you're not back here by noon tomorrow, the red-headed girl gets her hair dyed purple.
— Meowth
A group of Squirtle are making trouble for people around the town, including the heroes. Team Rocket is attacked as well, but Meowth manages to persuade the Squirtle to capture them all. However, Pikachu gets seriously injured by a Goldeen and though Squirtle lets Ash go, he must be back soon or Misty will get her hair dyed purple. Will Ash be able to get back on time and be able to save Pikachu before Team Rocket take it? Also, will the Squirtle stop their attacks?