You're super losers if you'd leave behind a sick Pokémon!''
— Cassandra 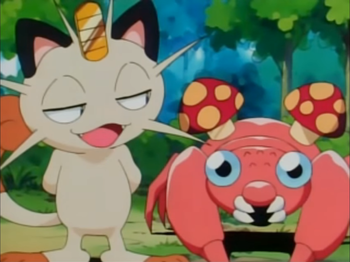 Meowth has ideas for Paras, but the girl he's after is way out of his league...not to mention the wrong species.

As our heroes continue their journey, Team Rocket never let up with their constant interception, but Meowth is feeling ill. After a young girl named Cassandra cures him, she soon meets with Ash's group and explains her difficulty in evolving her wimpy Paras.

This episode is notable for being the very first to be broadcasted on Kids' WB!; kicking off a seven-year run that helped elevate the franchise to where it is today.