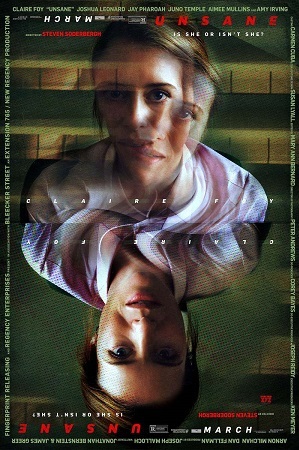 I'm not fucking crazy!
"He's here...Or maybe it's all in my head."
Advertisement:

Unsane is a 2018 Psychological Thriller film from director Steven Soderbergh. It stars Claire Foy, Joshua Leonard, Jay Pharoah, Juno Temple, and Amy Irving. It is noted for being completely shot on an iPhone 7 Plus.

Sawyer Valentini (Foy) goes to visit a counselor over her fears regarding a man named David Strine (Leonard) who stalked her for two years. She then finds herself involuntarily committed to a mental institution, Highland Creek, where David works as an orderly under another identity. Although Sawyer tries to tell others who he really is, nobody will listen to her.