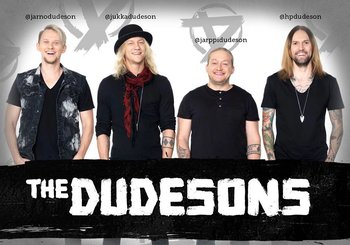 The Dudesons is a live action reality/comedy show documenting the life of four finnish "stuntmen", for the lack of a better term. The average day consists of crazy pranks, stunts and jokes. Originally, the series was called Extreme Duudsonit and was in finnish. Their english-spoken series The Dudesons premiered in 2006.

In 2010, The Dudesons starred in a new series, dubbed The Dudesons in America and was produced by none other than Johnny Knoxville and Jeff Tremaine alongside Rabbit Films, the Dudesons original production company, owned by themselves.

The Dudesons contains examples of:

Johnny Knoxville: This looks like such a bad idea!
Jukka: I think i tripped a little bit!