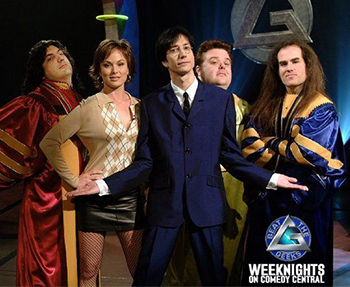 Tiffany Bolton: Today, one of these three contestants can win an incredible prize package worth over $5,000, but only if they can Beat The Geeks!
—Intro to Beat The Geeks during the First Season.
Advertisement:

Beat The Geeks was a Game Show that ran for two seasons on Comedy Central from 2001 to 2002. It was a basic "Test Your Knowledge" game with a twist: The contestants would be competing against "The Geeks," a group of people who specialize in pop culture trivia fields: A Movie Geek (Marc Edward Heuck), a Music Geek (Andy Zax/Michael Jolly/Michael Farmer), a TV Geek (Paul Goebel), and a Special Guest Geek who would be an expert in a various field.

Round 1: The Toss-Up Round

In Season One, in the first round, four five-point toss up questions would be asked. The first contestant to buzz in and answer correctly got the points. The Geeks did not participate in this round beyond adding commentary or giving the answers if the contestants can not. There was one question for each of the Geeks categories. After all four five-point questions were asked, four more questions, worth ten points apiece, were asked, again, one for each Geek category. After these questions were asked, the player with the lowest score was eliminated. In the case of a tie for the lowest score, a numerical question was asked, and the tie was determined by which player got the closest without going over.

In Season Two, the format changed. There were four pairs of questions, one for each Geek. The first question, worth ten points, was a toss-up question for all the contestants. Whoever buzzed in and got it right would then go head to head with the respective Geek for a chance to win ten more points (but they could lose five if they got the second question wrong, or the geek buzzed in first and got it right.)

Round 2: Challenging The Geeks

The two remaining contestants would then start competing against the Geeks themselves in this round. Each player had one opportunity to challenge a Geek to try and take his/her medal. In the first half, the player in the lead would challenge first, and winning the challenge was worth 20 points. (There was also a ten-point bonus for the Special Guest Geek.) To level the playing field, the contestants received relatively easy questions, while the Geeks received "impossibly difficult" ones. If the contestant got an answer wrong, his opponent could "steal" it for 10 points. For every question a contestant correctly answered, the Geek would have to defend his/her medal by answering a harder, "Geek level" question. If the Geek got it wrong, s/he would surrender his/her medal, and the contestant could wear it for the rest of the game.

The second half was played the same way as the first, except for Double the Points, and the trailing player goes first. The Guest Geek bonus was not affected.

After the Challenge Round, the game was decided by the Geek-Qualizer. The trailing player went first, and the host named a series of titles, people, places, and things, to which the contestant must respond if each one is best associated with movies, TV, or music. A correct answer was worth ten points. Answering incorrectly or not answering for more than two seconds ended the Geek-Qualizer for that contestant. After the Geek-Qualizer, the player with the lower score was eliminated (ties are handled the same way they are in Round 1), with the remaining player going on to...

Bonus Round: The Geek-To-Geek Showdown