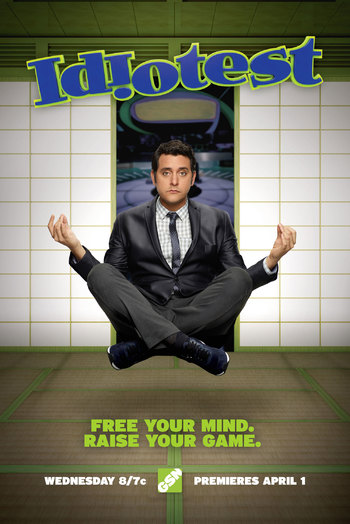 In the game, two pairs of contestants face a touchscreen with a simple instruction (Example: Touch the device that will definitely let you see through walls). There are several items to touch, but the correct item is usually not obvious (the picture might have X-ray glasses, an infrared camera, binoculars, a telescope, and a window in the background...which would be the correct answer, because a window definitely lets you see through a wall).

In the main game, each contestant starts with a set amount of money per question, which drops by a set amount for each second until the money is gone and replaced by the word "Idiot". In the first round, each team works together to find the answer (two $300 questions with $20 deducted per second). In Round 2, each player is given an individual puzzle, starting at $500 and decreasing by $25 each second. In Round 3, individual players from each team duel over the same puzzle, the first of which starts at $1,000 and decreases by $50 per second, and the second starts at $2,500 and decreases by $100 per second. In all cases, touching the correct answer earns the team the money left, while a wrong answer earns nothing.

The winners then move on to the "Smart Money Round". One player is sequestered offstage while the other player takes the final test. The two players have a combined 30 seconds (40 seconds in the third season) to answer; when the first player locks in, the other player takes the same test with whatever time is left. If one player gets this right, the team earns an additional $1,000, but if both get it right, they win $10,000.