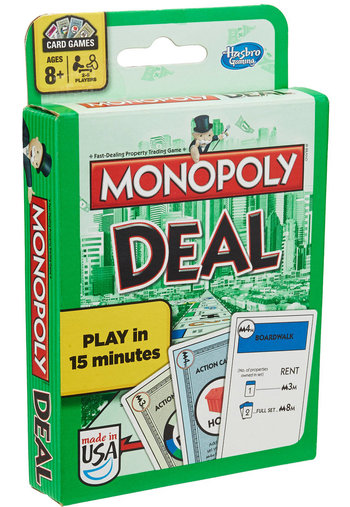 Monopoly Deal is a Card Game released in 2008 by Cartamundi under a license from Hasbro. It is the third of the Monopoly card game series, following Monopoly: The Card Game and Express Monopoly note Free Parking and Waterworks are A Day in the Limelight spin-offs.
Advertisement:

In Monopoly Deal, the player's goal is to make three full sets of properties of different colors. Each set consists of specific number properties of the same color (depending on the color, e.g. Browns have a two property requirement while the Light Blues have three). Each turn, a player draws two cards and plays up to three cards, either placing a property, adding money to their bank, or using an action card. Players can use payment cards to make their opponents pay from their bank or give up their properties if not enough cash is saved. Deal cards bypass payment and allow the player to instantly take away properties from their opponent.

A variant named Monopoly Millionaire Deal (out of print) changes the goal from collecting sets to collecting one million Monos (Monopoly Dollars, stylized as M). There is also a video game version of the original Deal game for the PlayStation 3, PlayStation 4, Xbox 360, and Xbox One.

In 2020, a spin-off called Monopoly Bid was released. While the goal is again collecting three complete sets, players now bid on properties and trade them with others. There's no charging rent, but properties can still be stolen.

Note: In the 2008-2017 versions, card values were written as M[number]m; most websites simplify the notation as [number]M. The 2018 revision marks the values as M[number]. This article uses the prior version's simplified notation.