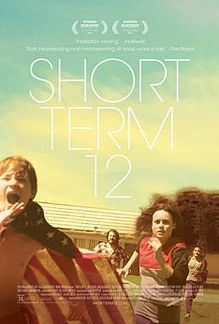 Short Term 12 is an American indie drama released in 2013. It was directed by Destin Daniel Cretton, and is a feature-length adaptation of a short film Cretton had created in 2010.

The titular Short Term 12 is a home for at-risk teens, supervised primarily by young counselor Grace Howard (Brie Larson), her boyfriend Mason (John Gallagher Jr.), with whom she is fairly distant, the sensible Jessica (Stephanie Beatriz), and new hire Nate (Rami Malek). The film focuses on Grace and her relationships with her loved ones and the youth at the facility, including the suicidal Marcus (Lakeith Stanfield) and the spunky new intake Jayden (Kaitlyn Dever), whose troubles increasingly begin to bring Grace's own past to mind.