Literature / Something Dark and Holy 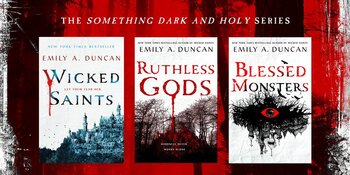 The Something Dark and Holy trilogy is a fantasy trilogy by Emily A. Duncan.

The first book, Wicked Saints, published in 2019, follows the adventure of a young cleric, Nadezhda "Nadya" Lapteva, from the religious Russian-inspired country Kalyazin, as she wrestles with her faith in a "land of heretics", the Polish-inspired blood magic kingdom Tranavia, with which Kalyazin has been at war with for decades. She ends up involved in not only the politics of the war between the countries, but between the gods whose voices she can hear.