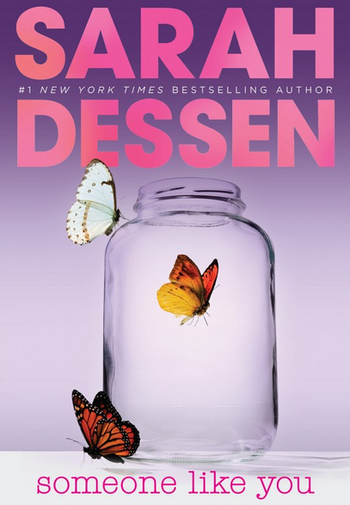 Someone Like You is a 1998 young adult novel by Sarah Dessen.
Advertisement:

The story follows a (school) year in the life of high schoolers and best friends Halley Cooke and Scarlett Thomas. Scarlett is bold, brash, and popular; Halley is far more reserved, notable only for her association with Scarlett. Then, Scarlett's boyfriend is killed in a motorcycle accident— and shortly after, Scarlett discovers that she is pregnant. For the first time in her life, Halley must step up and be Scarlett's support system, which becomes more difficult once Halley starts dating resident bad boy Macon Faulkner.

The 2003 film How to Deal is adapted from both this novel and Dessen's previous one, That Summer.

For the Short Story by Sheri S. Tepper, please see The Further Adventures of Batman.