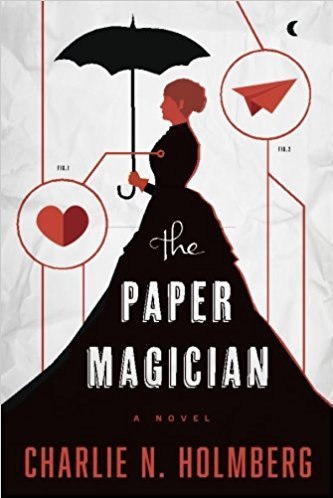 The Paper Magician is the name of a series of 2010s fantasy/romance novels by Charlie N. Holmberg, as well as the name of the first book in that series.

The series is set in a world where magic is a fairly commonplace and respected profession, like law or medicine. All magic in the setting is channeled through man-made materials. A magician begins their career by bonding with a specific type of material (metal, glass, rubber, plastic, etc.), and thereafter they do all their magic on or with that material. The bonding is irreversible, and a magician who has taken one bond cannot take another.

The first three books in the series follow the apprenticeship of Ceony Twill, a gifted young woman in early 1900s Britain, to the senior magician Emery Thane. Thane is a Folder, a magician specializing in paper, and so Ceony becomes one as well. In addition to her course of training, Ceony must deal with both external threats from practitioners of dark magic, and her own increasingly romantic feelings towards the man training her.

The fourth book focuses on a new character, Alvie Brechenmacher. Alvie is an apprentice Polymaker (plastic magician) from the U.S. studying in London.

The books in the series thus far:

The Paper Magician provides examples of: