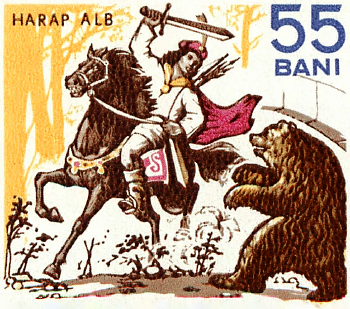 "Povestea lui Harap Alb" ("The Story of Harap Alb"), or just "Harap Alb" for short, is a Fairy Tale written by Romanian writer Ion Creangă. In the story, the Green Emperor needs a male heir to succeed him, because he is old and can die any moment. Unfortunately, because he only has daughters, he sends a letter to his brother, a king with three sons, asking one of his children to be successor. The King first sends his oldest son, who fails a test created by his father, and turns back at the bridge crossing in fear; his middle son is sent with the same result.

While the youngest son, only called Harap Alb, weeps over the failure of his older brothers, an old woman appears to him in the garden and tells him to accept the quest, foreseeing he will become a great emperor. She informs him that the only way to cross the bridge is to use the clothes, sword, and horse which his father used as a young groom. While initially ridiculed by his father, in the end he accepts; the son crosses the bridge, and sets off on the remainder of his journey.