"Sorry to barge in. We have a slight apocalypse."
—Rupert Giles 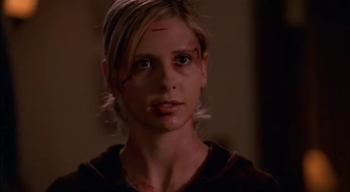 "I'm beyond tired. I'm beyond scared. I'm standing on the mouth of hell, and it is gonna swallow me whole. And it'll choke on me."
Advertisement:

The Scooby Gang are recovering from the attack by the Bringers and the loss of Spike, who is still being tortured by The First in the guises of himself, Buffy, and Drusilla. Spike, however, refuses to give in, telling The First that if Buffy believes in him, he can believe in himself, too.

Back at Buffy's house, the somewhat overenthusiastic Dawn and Anya help Buffy question Andrew, who leads them to the seal in the school basement. They find Spike's blood and cover the seal up again with shovels they find next to it. Still carrying the shovels, the leave the school, meeting Principal Wood on the way. He is also carrying a shovel, having just been burying Jonathan.

Back at the Summers house, Willow's locator spell goes terribly wrong. Explosive bolts send Anya and Buffy flying while Willow is briefly possessed by the First Evil. Xander smashes a bowl used in the spell which breaks the effect and sends Willow crashing. Buffy promises the panicked witch they will not call on her to use magic until they know what they are doing.

Giles suddenly appears at the door, bringing three Potentials and the news that the Watchers Council has been destroyed. He also has information on The First's plan to destroy the Slayer line. After assessing the situation, Giles tells Buffy that she is the only chance the Potentials and in fact the world have. The Potentials try to settle in, with Kennedy showing a definite interest in sleeping in the same room as the slightly flustered Willow.

Buffy and Giles go back to the Christmas tree lot where Buffy first found the Bringers in "Amends". She falls in a hole and meets the Turok-Han, and barely manages to escape alive after a stake to the "Ubervampire's" heart fails to kill it.

Giles and Buffy return to the house to find the three Potentials hanging out in the kitchen. Giles tells them all about the vampire Buffy fought. He explains that the Turok-Han are part of a separate race of vampires that is far superior to and feared by the everyday vampires Buffy is used to. At work, Buffy researches "evil" on the Internet as Principal Wood stops to check on her. Again, in the cave, Spike is smacked around by the Ubervamp while Drusilla dances about and tries to convince Spike to decide to be on their side of the game. Spike doesn't fall for the mind tricks and earns himself more of a beating from the Ubervamp.

Buffy reviews her wounds as her mother pays her another visit. Joyce talks to Buffy about evil and its constant presence in everyone and about the pressure Buffy's feeling to deal with this evil. She wakes up to find that she's still at work and had been in the middle of a meeting with a student. The student walks off and Principal Wood watches on from his office as a very tired Buffy tries to deal with the stress. Later that evening, the gang prepares for sundown and the potential danger it brings to them. The Potentials get weapons while Andrew tries unsuccessfully to convince Buffy and Xander to untie him. As Buffy watches for the sun to set, Giles reminds her that she's the one being depended on and then Molly interrupts, informing them that Annabelle ran off.

Annabelle runs through the streets of Sunnydale until she's captured by the Ubervamp and quickly killed. Buffy shows up in time to find the dead body and be attacked by the Ubervamp herself. She is hurt and runs off in search of better fighting grounds and a useful weapon. Again, the vampire has the upper hand, but Buffy drops a bundle of heavy steel beams on the creature, smashing it to the ground. Practically unaffected, the Ubervamp rises from the mountain of beams and goes after Buffy again. He throws her around some more, finally tossing her through a stone wall where she's buried under rubble and steel on the other side.

The First in Drusilla's form gets angry with Spike as he continues to refuse to cooperate. Because of Buffy's faith in him, he feels strong enough to refuse. A terribly wounded Buffy sits alone at home as she listens to Giles and Willow talk in another room. They worry about Buffy's condition and their ability to fight this thing that seems so much bigger than them all. Buffy finally comes downstairs and gives an inspirational speech about this huge challenge before them that is bigger than any evil they've ever faced. She tells the group that she's more scared than ever, but she's not about to back down now. There's a new plan: They're declaring war on this evil instead of waiting for it to make a move.