Recap / Buffy the Vampire Slayer S1E1 "Welcome to the Hellmouth"

"To make you a vampire, they have to suck your blood and then you have to suck their blood. It's like this whole big sucking thing. Mostly they're just gonna kill you."
—Buffy Summers 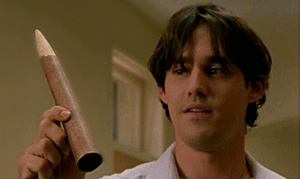 Is this some kind of new feminine product I don't know about?
Advertisement:

Nighttime. In a deserted high school, a randy young man invites his leery date, a Catholic schoolgirl, up to the gym roof for some boffo "stargazing". Just as they are about to kiss, she pulls away and claims she heard a noise. The coast is clear. Suddenly, her lovely face becomes bumpier and paler, as if she were—gasp—dead! But more importantly, now she has fangs! Before the poor sap knows it, she's draining the blood from his neck. Bet you didn't expect that!

Somewhere else, a teenage girl sleeps fitfully; visions of cemeteries, monsters, and rivers of blood interrupt her rest. She jerks awake just in time to hear her mother call her name. This is Buffy Summers, Vampire Slayer, and it's her first day at her new school.

Pan up to Sunnydale High. Xander Harris menaces pedestrians with his out-of-control skateboarding. As his eyes follow Buffy, he skates straight into a guardrail. Dazed, he looks up to see a redhead, Willow, smiling over him. Willow pines for Xander, and she gently teases him about his study habits, but Xander is obsessing over the new girl. The dynamic of the next three Seasons is set. They run into a third member of their trifecta, Jesse, who is blissfully unaware that he's a tertiary character on a Joss Whedon show and thus not long for this world.

Buffy is called in to meet with her new Principal. Principal Flutie jovially rips up her school record, only to tape it back together when he reads that she burned down a school gym. Things only go downhill from there. As Buffy exits his office, she rams into another student, spilling the contents of her bag. Xander sees this and seizes the opportunity to play Rico Suave. As they gather her things, Buffy thanks him and goes back to her business. Xander notices she left something behind ("Oh, hey! You forgot your...stake.").

Buffy gets chummy with a popular girl, Cordelia, who takes her under her wing. It's all syrup and honey until they run into Willow at the water fountain; Cordelia does a 180° as she barks at Willow to beat it. Buffy looks droopy, but says nothing.

Buffy heads into the school's cavernous library to pick up some textbooks. There she meets Mr. Giles, the school librarian. Instantly, Giles makes her for The Slayer and whips out an imposing tome marked Vampyr. Buffy, shaken, tells him he's mistaken and leaves.

In the girls locker room, two students are gossiping about Buffy. Her reputation precedes her. As they continue to dish dirt, one of the girls opens her locker and a dead body falls out. It's our Romeo from the opening scene.

Buffy hears the news from Cordelia, who is surprised to find her in the courtyard bonding with Willow. Alarmed, she wants to know how the guy died and if he had any marks on him. She busts into the cordoned-off locker room—breaking the door in the process—and finds a bite mark on his neck.

Buffy returns to the library to confront Giles. She tells him that she's retired from slaying, but Giles reminds her who she is—the Slayer, the one girl in all the world with the strength to fight vampires, et cetera. He also tells her that Sunnydale is built on a convergence of mystical forces, making it a mecca of magical mischief. Buffy suggests that if he's so keen on slaying, maybe he should do it. Befuddled, Giles asserts that he is a Watcher—he trains and mentors the Slayer. Buffy asks him if he can prepare her for getting kicked out of school and losing all her friends, then leaves in a huff. Behind them, Xander emerges from the stacks, having heard the whole conversation.

Buffy accepts Cordelia's invitation to the Bronze, a club on "the bad side of town" (which is "half a block from the good side of town", since there's not a lot of town). Along the way, Buffy is shadowed by a sinister figure. He tails her into an alley, then peers around impotently. Above him, Buffy is doing a handstand on a bar spanning the alleyway. She swings down and bowls him over with a kick. The stranger (actually Angel, but you're not supposed to know that yet), irritated, straightens his jacket and tells her they have a common goal—to kill all the vampires. He tosses Buffy a small box from his coat, telling her to be ready for "the Harvest". She opens the box to reveal a silver cross.

Buffy joins Willow at the bar, and the pair get acquainted. Willow explains that she's nervous around boys. Buffy tries to draw Willow out of her shell and says that her life philosophy is "seize the moment". She then spots Giles lurking about on the upper deck of the Bronze and jets off to chastise him for being grody. Giles grumbles that he's come to persuade Buffy to take her duties seriously. Downstairs, Jesse approaches Cordelia and asks her to dance. Cordy makes a face and gives him the brush-off. Burned again, Jesse looks around for fresh prospects.

Back on the landing, Giles opines that the club is a perfect hunting ground for vamps. He encourages Buffy to try and sniff out a vampire in the room. "There's one," she says, interrupting him; the vamp's vintage eighties getup is a dead giveaway. Suddenly, the vampire moves and reveals his date: it's Willow, seizing the moment. Buffy draws her stake and chases them into a back alley, but only finds Cordelia in a snit. Cordelia immediately starts dialing everyone she knows to rescind Buffy's Libby membership card. Meanwhile, Jesse, still on the prowl, chats up the vampire schoolgirl (Darla) from The Teaser.

Under the town, a grotesque figure rises from a pit of blood. It's a wizened vampire, one who doesn't look remotely human. A kneeling vampire, Luke, addresses him as "Master". They discuss the coming Harvest which will restore his power. Luke has sent his servants to get food for the Master, who requests something "young".

As the vampire leads Willow into a cemetery, Buffy runs into Xander outside the Bronze. He makes a pointed comment about slaying vampires. Buffy grumpily wonders if there was an announcement in the newspaper. Xander thinks Buffy is suffering from delusions of grandeur, but Buffy convinces him they need to find Willow fast.

The vampire stops outside a crypt and tries to entice Willow to go in. When she declines, he roughly shoves her inside. They are soon joined by Darla and Jesse, whose throat is bleeding. Game faces on, the vamps seem ready to chow down when Buffy swoops in. The vampires circle her, unsure what to make of this. After she stakes the '80s vamp, Willow, Xander, and Jesse scramble to safety.

Buffy cracks wise to Darla about how she just wanted a quiet life, giving Luke a chance to grab her neck from behind. He throws Buffy across the crypt and then bitches Darla out for not bringing the Master his dinner. Luke tells Darla to leave while he takes care of the "little girl" himself. Up above, the rest of the gang are surrounded by leering vampires.

Buffy tries to drive a stake into Luke's heart, but he breaks it in half with his hand. He flings Buffy ass over teacup into a stone coffin, then vanishes. The room is silent. Just as Buffy gets up the courage to peek out, Luke leaps in with her, bearing down on her with open fangs. To be continued.

Scene from Buffy the Vampire Slayer, Ep 1 - Welcome to the Hellmouth. Our series opens with a delinquent couple breaking into Sunnydale High after hours for a little make out. However one of them isn't as they seem.

Scene from Buffy the Vampire Slayer, Ep 1 - Welcome to the Hellmouth. Our series opens with a delinquent couple breaking into Sunnydale High after hours for a little make out. However one of them isn't as they seem.