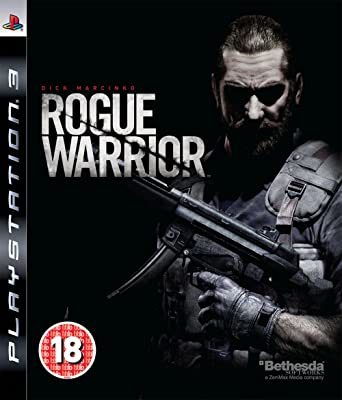 Rogue Warrior is a 2009 First-Person Shooter/Third-Person Shooter by Rebellion Developments (specifically Rebellion Derby, formerly known as Core Design aka the origin Tomb Raider developers) for PC, Xbox 360, and Playstation 3. It is based on the Rogue Warrior series of novels by Navy SEAL Richard "Dynamite Dick" Marcinko, who also serves as the game's player character, voiced by Mickey Rourke.

The game is a first-person shooter with third-person cover shooting, similar to the two Rainbow Six : Vegas games. There is also a large emphasis on elaborate melee takedowns, of which there are more than two dozen uniquely motion captured ones. The plot follows Marcinko as he blasts his way through North Korea and later Russia in pursuit of nuclear missiles.

Not to be confused with Rogue Trooper, another cover-based Third-Person Shooter developed by Rebellion.