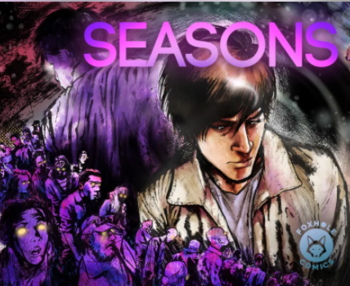 The War of Self
Everyone standing in the light of the sun has four shadows. Behind, the past. Forward, the future. On one side, evil. On one side, good.
— Fletcher Hart Iiams
Advertisement:

, written by Nandor Fox Shaffer, and drawn by Anthony Gonzales-Clark, is the story of a young man named Fletcher, who's living in a rut. He lives alone, works two jobs, and is estranged from his parents. His only remaining reason to live is his beautiful coworker Cathlyn, and he dreams of one day getting up the nerve to ask her out. The upcoming office party in honor of the company's founder should be the perfect opportunity, right?

Only minutes before Fletcher can finally tell her how he really feels about her, Cathlyn introduces him to her new boyfriend James, absolutely destroying him in the process. But this is more than just heartbreak- all of a sudden, Fletcher can see Cathlyn's future- one where she marries James, and Fletcher is completely absent. Running away in despair, Fletcher's heartbreak and depression suddenly manifest themselves in a shadowy mirror version of himself. And for some reason, both him and his clone have strange extraordinary powers.

When his shadow-self begins wreaking havoc on his city, Fletcher has no choice but to contain the damage he's inadvertently caused, by stopping the clone from creating shadowy copies of other people. Along the way, he's forced to confront his own past, and the personal issues that gave rise to his shadow in the first place.

A new season has begun.