Film / All This, and Heaven Too 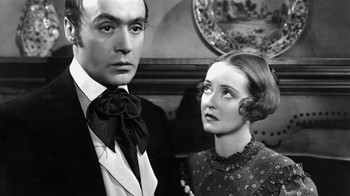 All This, and Heaven Too is a 1940 film directed by Anatole Litvak, starring Bette Davis and Charles Boyer.

France, 1846. Mademoiselle Henriette Deluzy-Desportes (Davis) is governess to the four children of a French noble, Theo, the Duc de Praslin (Boyer). The Duc is stuck in an unhappy marriage with an awful shrew of a wife, the Duchesse Francoise (Barbara O'Neil), but he stays in the marriage for the sake of the children.

However, the awful Duchesse is driven to rage by the presence of the kindly, gentle Henriette, who has earned the affection of the children and the love of the Duc. The Duchesse winds up firing Henriette. The poisonous relationship between husband and wife leads to a confrontation with tragic consequences.