Film / The Earrings of Madame de... 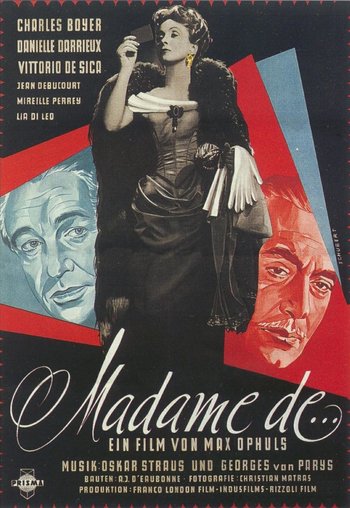 André and Louise (Boyer and Darrieux) are a general and his countess living in France sometime around the end of the 19th century. Whatever intimacy they may have once shared in their marriage is definitely gone, but they seem to have settled into an amicable friendship. Louise is in debt because of...something, so, needing cash, she sells some lavish diamond earrings that were a present from André. To cover their disappearance she claims that they were stolen. The jeweler is uncomfortable hearing this, and goes to André, who buys the earrings back. He doesn't tell Louise, though, instead giving the earrings to his mistress.

The mistress goes on a vacation to Constantinople, gambles all her money away, and sells the earrings. They are bought by Donati, an Italian diplomat posted in Paris (de Sica). Donati meets Louise and they fall in love. Donati, unaware of the origin of the earrings, gives them to Louise as a present. Louise, unaware that André knows her secret, contrives to "find" them.

Charles Boyer was a Frenchman who had come back to the French film industry after two decades starring in Hollywood. Vittorio de Sica is better remembered as a film director, who helmed a host of classics, including Bicycle Thieves and Two Women.