Film / The Children Are Watching Us 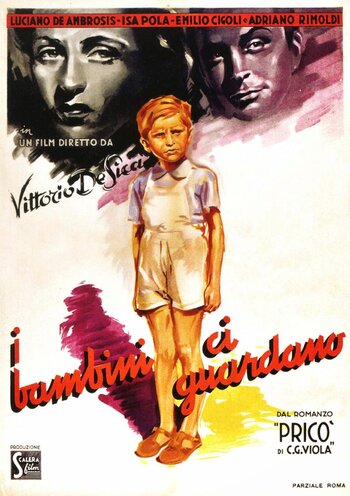 The Children Are Watching Us is a 1943 film from Italy, directed by Vittorio De Sica.

It is told from the perspective of Prico, a little boy, son of Andrea and Nina. His parents maintain a superficial air of respectability, but in fact his mother has for two years been having an affair with a man named Roberto. One day Nina takes Prico out for a trip to the park, but in fact her real purpose is to meet Roberto. Roberto begs Nina to go away with him, and she tells him that she can't. However, that very night, Nina does in fact run away with her mother.

Andrea, left as a single father and evidently unwilling to raise a son with only the maid for help, looks for someone to take the boy in. Nina's sister refuses, as does Andrea's own mother. Eventually, a shamefaced Nina returns, the parents reconcile, and the whole family goes on a vacation to the beach to put the past behind them. Unfortunately, Roberto follows, and Nina once again gives in to temptation.

Vittorio De Sica's fifth film as a director, made during a particularly chaotic moment in Italy's history. It was filmed in 1942 under Fascist Italy but not released until October 1943, at a time when Italy had been occupied by the Germans and divided between Mussolini's puppet regime in the north and liberated territory in the south, with the Allies slowly fighting their way up the peninsula.