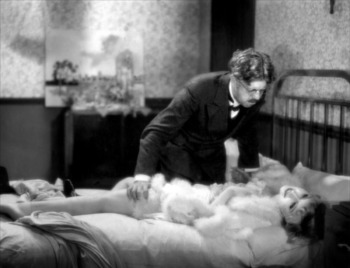 Maurice Legrand (Michel Simon) is a meek, timid cashier for a hosiery company. His life isn't a particularly happy one—his coworkers don't respect him, and at home, he's shackled to his wife Adèle, who despises him and compares him unfavourably with her deceased first husband, Sergeant Alexis Godard. His only joy is painting, which he does as a hobby. On the way home from a company party, he sees one André "Dédé" Jauguin (Georges Flamant) smacking around an attractive young woman named Lucienne "Lulu" Pelletier (Janie Marèse). Maurice knocks André down and escorts Lulu home.

Maurice is a gentleman but extremely naive, and doesn't pick up on the fact that Lulu is a prostitute and André is her pimp. Lulu is deeply in love with André despite the fact that he's a creep and a lout who is physically abusive to her. She doesn't like Maurice at all but pretends to be his girlfriend so André can bleed him for money. When Maurice gives her his paintings, Lulu and André pass them off as hers and sell them, making quite a bit of money. Eventually Maurice finds out how he was deceived, with tragic consequences.