Film / The Devil and Miss Jones 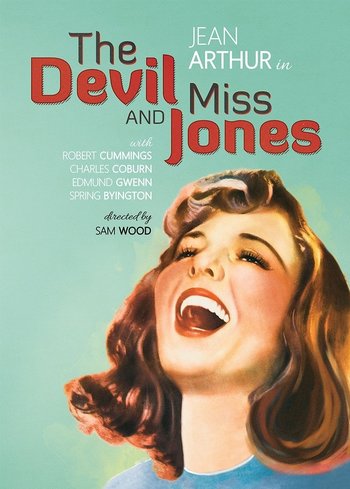 Laughing at the Devil.
Advertisement:

The Devil and Miss Jones is a 1941 Romantic Screwball Comedy from The Golden Age of Hollywood, directed by Sam Wood and starring Jean Arthur and Charles Coburn.

A multi-millionaire tycoon, John P. Merrick (Coburn), owns a bothersome department store where employees are raising hell for unionization. Realizing he’s the only one that can stop them after interviewing a so-so detective, he goes undercover as Thomas Higgins: a lowly store clerk who the store higher-ups know is there to spot the rebellious workers.

Awful at being a clerk, he gets help from and befriends Mary Jones (Arthur), who thinks he’s a poor old man down on his luck. Her best friend, Elizabeth (Spring Byington), who also works at the department store, becomes enamoured with Higgins, because she thinks he’s a poor helpless man. John believes them to be fine, upright women… until he finds out that they’re part of the rebelling unionizers. Mary’s boyfriend, Joe O’Brien (Robert Cummings), the leader of the rebelling workers, invites Higgins to their meeting where, to John’s surprise, he’s held as a prime example of the people these workers are trying to help.

John tries to hold them in contempt, but the more he gets to know them, the more he agrees with their ambitious plans for his department store.

Under absolutely no circumstances should you confuse this film with the 1973 pornographic film The Devil in Miss Jones. Trust us.

Tropes found in this film are as follows: