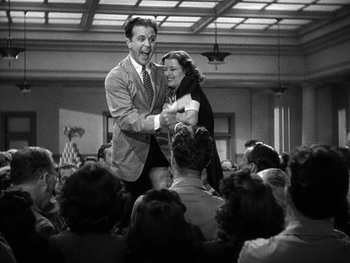 He's in the money!
Advertisement:

Christmas in July is a 1940 Screwball Comedy film written and directed by Preston Sturges, starring Dick Powell and Ellen Drew.

Jimmy Macdonald (Powell) is an accounting clerk who wants to win the Maxford House Coffee Slogan Contest because it means a cool $25,000 in his pocket. With that kind of dough, he can marry his sweetheart, Betty (Drew) and give his mom (Georgia Caine) the davenport she’s always wanted.

His excitement is noticed by his employers and colleagues alike. In a prank to see how he’d react, his fellow clerks forge a telegram from Maxford, saying his slogan won the $25k prize. And Jimmy believes it, and so does everyone else without knowing that the jury deciding which slogan will win is still out. Jimmy and Betty begin to spend and dream until the truth comes out to ruin everything.

Sturges' second directorial effort, he adapted the screenplay from his own 1931 play A Cup of Coffee. The supporting cast includes several of the character actors who would frequent a number of Sturges' other films and become a sort of stock company, including Georgia Caine, William Demarest, Franklin Pangborn, Jimmy Conlin, and Frank Moran among others.

Not to be confused with the trope Christmas in July.

This film displays the following tropes: