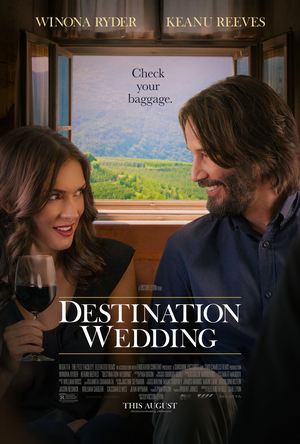 "But don't you believe there's someone for everyone?"
"Close. I believe that there's nobody for anyone."
Lindsay: So we're just the people you don't know where to stick?
Frank: Might as well just stick us together.

Destination Wedding is a 2018 Romantic Comedy starring only Keanu Reeves and Winona Ryder. It was written and directed by Victor Levin.

Frank (Reeves) and Lindsay (Ryder) are two socially maladjusted misanthropes who get off on the wrong foot at the airport. Shortly after, they realize that they're both reluctant attendees at the same destination wedding in San Luis Obispo, California. Mostly left to their own devices during the wedding activities, the cynical Frank (the groom's estranged half-brother) and the romantic Lindsay (the groom's ex-fiancee) find themselves gravitating towards each other.