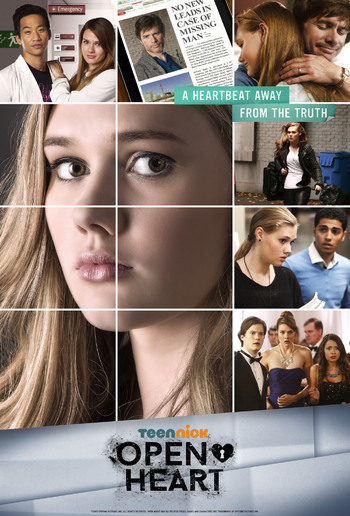 Open Heart is a 2015 Canadian teen Medical Detective Drama series airing on YTV in Canada and TeenNick in the United States. It lasted one season.

16 year-old Dylan Blake is part of the Blake family, who for years have been associated with Open Heart Memorial Hospital. Her grandparents were founders, her mother and sister are both doctors there, and when she was born there without breathing it was the staff that saved her life. It's also the last place her father Richard was seen before he vanished without a trace.

The disappearance weighs heavily on Dylan, driving her down a bad path of drugs and robberies. After a heist gone wrong leaves her and a dying friend abandoned by the rest of the crew, she's forced to drive to the hospital (in the car she stole from the house she broke into) and is subsequently arrested. Three months later she's sentenced to community service at Open Heart Memorial, which neither she or her mother or sister are too keen on.

To complicate things further, her father's case has been closed due to insufficient leads. This isn't good enough for Dylan, and she begins a quest to sleuth out what really happened to her dad using both the skills she gained from her life of crime and her close connection with her father that the rest of the family didn't have. Aided by fellow volunteers Mikayla and Wes, hampered by obnoxious volunteer supervisor Jared and the near-constant presence of her own family, she searches through the mysteries of the hospital in order to find the truth. Unbeknownst to her, there may be more to her father's disappearance than what her grandparents are letting on.

The series is very similar to Veronica Mars, with the deadpan protagonist and the teen detective aspect. It also has a tie-in app, Open Heart: Unlocked, which allows you to access real-time texts, photos, and blog posts from Dylan's phone both during and between episodes.