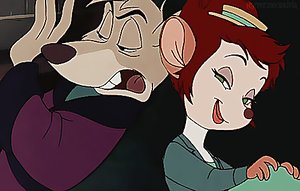 A Crossover fan fiction by Masked Bard, which links The Great Mouse Detective with An American Tail.

The year is 1886. Basil of Baker Street, fresh off of busting Ratigan's latest heist at the British Museum, travels to New York City in search of stolen artifacts which he discovered had been sold on the black market to "a feline obsessed with culture". Upon his arrival he's assigned someone from the NYPD to be his body guard, who, as Basil deduces, is actually a woman in disguise, Miss Nellie Brie, a famous undercover reporter who couldn't resist getting the scoop on Basil's latest case. After proving her worth as an assistant to Basil, the two embark on a case that takes them through the corrupt underbelly of New York, exposing a crime lord, and in the process, even helping a certain lost little boy reunite with his family.

The fanfic, in its complete state (19 chapters in all), can be read on DeviantArt here

, or on FanFiction.Net here

. The FanFiction.Net version has some differences, whereas scenes and lines of dialog taken directly from the script of An American Tail were removed or at least altered at the urging of the website's moderators. Surenity has also completed two sequels, Olivia Goes West and The Great Mouse Reporter. Olivia Goes West is also available at both DeviantArt