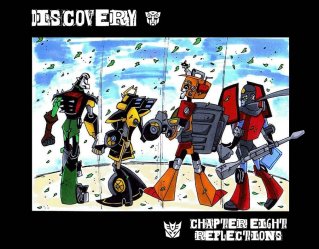 The cover of Chapter 8
Advertisement:

Another AU Fan Webcomic by Neo Yi, this time about Transformers: Animated, a What If? scenario where Prowl accepts Lockdown's partnership in "A Fistful of Energon". In more ways than one.

Along the way, they pick up Cloud Cuckoolander Wreck-Gar, The Smart Guy Perceptor, and Team Pet Skippy to form the bounty hunting team the Crescendolls.

Sadly, it's been discontinued