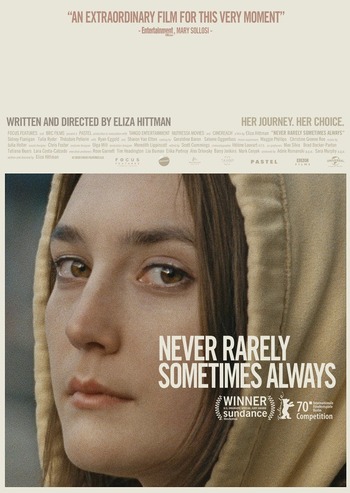 Her journey. Her choice.
Never Rarely Sometimes Always is a 2020 British-American drama film, written and directed by Eliza Hittman.
Advertisement:

Seventeen-year-old Autumn Callahan (Sidney Flanigan) suspects she is pregnant. After an unsuccessful visit to a crisis pregnancy center, where she is given deliberately misleading information about her pregnancy, Autumn learns that she is unable to get an abortion in Pennsylvania without parental consent. She subsequently attempts and fails to induce a miscarriage herself, and enlists her cousin Skylar (Talia Ryder) to accompany her on a bus ride to New York City to visit Planned Parenthood and obtain a legal abortion.

The film was produced by BBC Films, and distributed by Focus Features. It had its world premiere at the Sundance Film Festival on January 24, 2020, and was later released in the US on March 13, 2020.