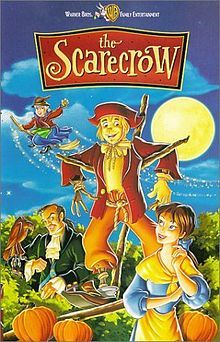 A direct-to-video production directed by Brian Nissen and Richard Rich.

“In the time of the pilgrims,” a witch brings her scarecrow to life and teaches him to dance. He falls in love with a beautiful girl called Polly. Unfortunately, Polly is trapped in a workhouse, trying to save up enough to free herself and a trio of Heartwarming Orphans. Fortunately, the witch has a spell that will allow the scarecrow to look human and try to save them, and he'll have the help of a talking mouse and a magic broom along the way.

The story is Inspired by… Nathaniel Hawthorne’s short story "Feathertop" and its stage adaptation, The Scarecrow, by Percy MacKaye.