Film / KISS Meets the Phantom of the Park 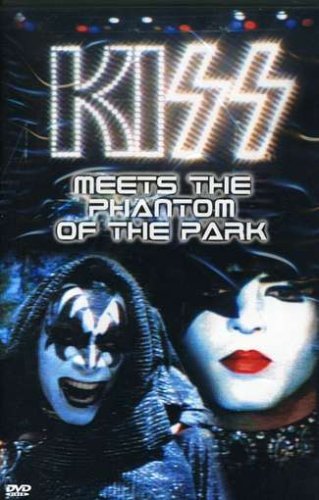 KISS Meets The Phantom Of The Park is a 1978 made-for-TV movie which aired on ABC shortly before Halloween of that year. Produced by Hanna-Barbera (yes, that Hanna-Barbera!) and starring the band KISS.

The story revolves around KISS playing a series of gigs at the Magic Mountain amusement park (now Six Flags, but they never address the park by its name in the movie) simply because the park needs more guests and the owners think the hottest band in the world will bring 'em in. This does not sit well with Abner Devereaux, the park's co-founder who makes animatronics and robots, which he takes pride in making and thinks they're the reason that people come. Abner decides to destroy KISS and/or the park itself, with help of Sam, a brainwashed park employee. It's up to KISS, with the help of their superpowers and Melissa, Sam's fiancée, to help stop Abner and save the park.

It was panned by fans and the band themselves upon release. It was later re-edited and released outside the United States as Attack of the Phantoms; this version can be found on the "Kissology Vol. 2" DVD set.