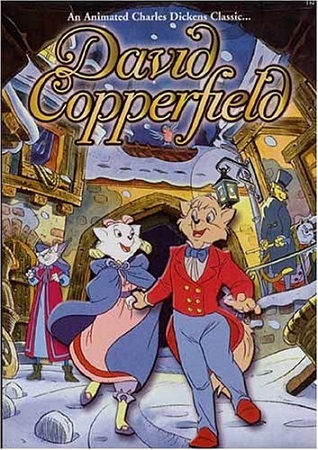 David Copperfield is a very loose Animated Adaptation of Charles Dickens' famous literary masterpiece. It stars Julian Lennon as both the speaking and singing voice of its protagonist.

Like the novel it was based on, the film starts with David's birth in Blunderstone, England in 1820. His great-aunt Betsey takes great offence to his being born male and storms out, but David's mother and their faithful servant Peggotty dote on him. David (nicknamed "Davey") grows up happy, but his mother is frail and feels they need someone to take care of them. So she marries the wealthy but blackhearted cheese merchant, Edward Murdstone who wastes no time sending Davey to work as a slave in his cheese factory. Now, it's up to Davey to escape Murdstone and his dim-witted minion Grimby and save not just his mother but the other orphans that have been abducted by Murdstone. Oh yeah, and there's a giant vulture mixed in there somewhere too.

Did we mention David is an anthropomorphic cat in this version? Or that it's an Anthropomorphic Animal Adaptation set in a World of Funny Animals?

As you can probably tell, "loose adaptation" doesn't quite do it justice.

It was produced for and first broadcast on NBC during the 1993 holiday season and is now available on DVD from GoodTimes Entertainment.