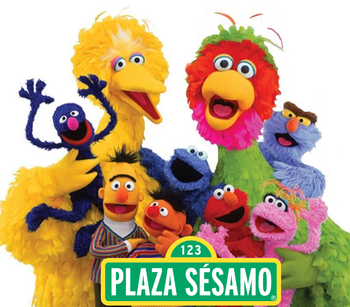 The Muppet cast of Plaza Sésamo (including the American Muppets that appear regularly)
Advertisement:

Plaza Sésamo (known simply as Sésamo until 2022) is the Latin American co-production of Sesame Street. Premiering in November 1972 and co-produced with Televisa (until 2013), the series initially featured a cast which was comprised chiefly of Mexican performers, but also included Panamanians and Argentines and featured "neutral Spanish".

As the years progressed, however, the series more explicitly reflected Mexico, where the show is shot. In addition to airing in Mexico, Puerto Rico, and throughout Spanish-speaking Latin America, the series debuted on PBS in 1995, broadcast primarily in Southwest markets on Saturday mornings (as such, it was the only Sesame Street co-production that has been widely seen in the United States). A few American broadcasts had an extremely rare variant of the 2000-2006 PBS Kids funding bumper

The show's main original Muppet characters include Abelardo Montoya, a Big Bird-like parrot (Word Of God says that Abelardo is actually supposed to be Big Bird's cousin), Pancho, a blue Grouch-like character (despite not necessarily acting like any other Grouch), and Lola, an adventurous pink female Anything Muppet. Muppet characters from the American show appear in dubbed inserts, and Abelardo even visited Big Bird on Sesame Street in the US in an episode that aired on Cinco de Mayo

In 2013, RCN took over production from Televisa and filming of the show itself moved to Colombia until 2016.note Televisa's Canal 5 would continue airing Plaza Sésamo until the late-2010s, when the show moved to TV Azteca's Azteca 7 channel.

The 90s intro for Plaza Sesamo features many 2D characters in live action before completely transitioning to traditional animation.

The 90s intro for Plaza Sesamo features many 2D characters in live action before completely transitioning to traditional animation.