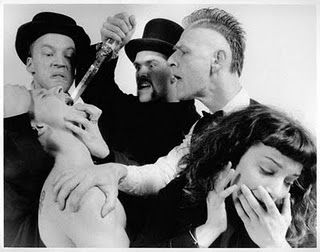 The band was begun by Nils Frykdahl (guitars, flutes, bells, others) and Dan Rathbun (bass, 'log' dulcimer, trombone, lute, others) of the band Idiot Flesh with Carla Kihlstedt (violins, percussion guitar, autoharp, organ, bulbul, others) of the band Charming Hostess, and included at various times:

Advertisement:
All had comprehensive musical training, all sang for the band, and played a variety of odd custom instruments designed by Rathbun for unique sonic properties.

Known for bringing a sense of performance art to their live act, the band (dressed in homemade costumes and makeup) would engage in elaborate stage shows including pseudoscientific demonstrations, the telling of apocryphal stories about dadaists, and packing up and leaving the stage before returning to continue playing, often inviting the audience to participate in various ways.

Lyrically they were very kitchen sink, as befitting a group lacking one predominant songwriter, though an overall thematic of absurdity and concomitant humour permeates most of the band's work. A strong literary and artistic sensibility informed the band's dispensations on topics such as subjectivity, (anti)humanism, and (anti)realism, though you'll never hear those words uttered in the songs themselves; and their frequent quotations from, citations of, and allusions to various figures and sources, from James Joyce, to G.W.F. Hegel, to Louise Bourgeois, and the Unabomber, combined with the occasional Bilingual Bonus, reward careful and detail-oriented appreciation without demanding it up front as the price of admission.

This band exhibits the following tropes: