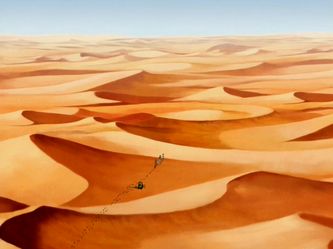 The Si Wong Desert takes its toll on the Gaang as they're forced to navigate without Appa.
"What are you doing?"
"Trying to keep everyone together."
Advertisement:

Picking up from the events of the previous episode, the Gaang are forced to make their way out of the Si Wong Desert on foot. Aang is depressed and enraged over the loss of Appa, Toph is blind in the sand, and Sokka and Momo end up on a Mushroom Samba after drinking liquid from the inside of a cactus, leaving Katara to hold the team together single-handedly. Eventually, they find one of the boat... ish craft the local Sandbenders use to get around and are then confronted by the very Sandbenders who stole Appa. Toph recognizes this fact by their voices, which pushes Aang's Berserk Button. While just about everyone flees the wrath of the Avatar State, Katara advances into the gale and administers a Cooldown Hug. The episode ends with the two of them weeping in each other's arms.

Meanwhile, Iroh and Zuko are ambushed by the Rough Rhinos last seen in "Avatar Day." When Zuko asks Iroh if he has any friends that aren't trying to kill him, Iroh leads them to the Misty Palms Oasis in search of an old friend. This man, Fung, is sitting at a pai sho table, and the two create the icon of a lotus blossom on the board. This is evidently a secret handshake of some sort for "The Order of the White Lotus," which Uncle Iroh is a high-ranking member of, and Fung helps smuggle the two to Ba Sing Se—right under the noses of Xin Fu and Master Yu, Toph's pursuers, who have decided to engage in a little bounty-hunting on the side.

A swarm of buzzard wasps circles overhead as the Gaang tries to find their way out of the desert.

A swarm of buzzard wasps circles overhead as the Gaang tries to find their way out of the desert.